Skadu Too - a versatile awning/shade/cover for everyone

Perhaps VDub owners might not agree but we Romahomers consider our vans to be the pinnacle of minimalistic campervan design. And Liz and I are always on the lookout for accessories that complement that minimalism; chairs and tables that fold away to nothing, collapsible or stackable pots and pans, innovative storage solutions, our van has them all. So when we saw a picture of someone with a Skadu on their van we knew we just HAD to buy one!

The Skadu is a minimalistic awning/shade that is held in a rigid half clamshell shape by three fibreglass tent poles. Two long (4.5m) fibreglass poles cross externally and fit into corner pockets and then pole clip along the length of the awning, a small tie holding the cross point in place. A shorter (2.6m) pole fits across internally and ensures bowing in the other direction.

There are no instructions provided, not even a diagram but assembly is both obvious and easy, although the longer poles are quite long and so a bit unwieldy but simply insert one of the (rubber protected) ends into a corner pocket and advance along the line of clips until reaching the opposite pocket. A little pressure is required to bow the pole to slip into the corner pocket but it's not much effort and certainly no more (and probably much less) than fitting regular awning poles. Repeat with the other pole and tie the cross in the centre. Now reach inside and fit the cross pole, again into two pockets but no pole clips this time. We found it easiest to bow this pole downwards or sideways and once in both pockets rotate into the upright position and tie off. To complete the assembly there is a small black mesh 'pocket' that simply toggle clips into loops on the inside roof; handy to allow small items or for a torch or light to provide night lighting.

The hardest part of assembly of the brand new awning was actually getting the pockets to open, but they were much easier on second and subsequent times once they had loosened from their factory newness.

Just a simple teardrop but even like this it is extremely useful. Pegged down it makes a good space to store camping accessories such as chairs and tables overnight in the dry, or even as a pitch marker with equipment and hook-up cable stowed out of the rain for those quick trips off site.

Hytop Romahomes like mine are tall, almost 2.3m tall, which means that many conventional awnings don't fit well. Let's see if the Skadu fares any better.

That fits nicely, and importantly, the fibreglass poles shape the Skadu so that just away from the van it is actually higher than the van; this is important, it means the back door doesn't foul on the awning. In fact the door opens almost all the way until it is flat with the van before it starts to rub on the Skadu; so many of our previous attempts at finding the perfect awning been scuppered by this problem.

Of course, the Skadu doesn't just fit a Romahome, it will fit any vehicle up to the Romahome's height and probably a bit taller. Shorter vehicles like vehicles based on Transit or VW vans will just have not such a steep angle for the Skadu but it should provide a back porch quite nicely.

The more eagle-eyed of you may have spotted a small rubber suction cup on the front of the Skadu. These are designed to hold it close to the van. In reality we found them to be one of the few things that didn't really work for us, we just couldn't get the supplied suction cups to stay stuck to the van - it didn't help that one of them had been rolled in the packaging and so was no longer flat - hopefully a little hot water will remedy that. However the idea is very sensible and we plan to replace the factory supplied sucker cups with a couple of better quality ones. The two guy ropes that are attached to the awning itself are terminated with a small plastic hook. This makes it a simple task to clip the guys to the wheel trim, or, as we have done, loop the guys over the van's wing mirrors.

So the Skadu works as a rear porch or sun-shade - what about vans with a side door or when you want a side awning?

It works just as well as when on the back of the van and once again it would work equally as well on vans less tall than the Romahome where the awning would cover an even bigger distance away from the van than the 2m in our case. And even simpler to install - in this case the two attached guy ropes have just been pulled over the roof of the van and clipped to the wheel trims on the opposite side.

Ah, but the Skadu also comes with 4, 3-section, painted, lightweight, steel tent poles which are 1.5m high when connected, along with 4 additional guy ropes. Each pole needs a couple of guying points so the supplied four guy ropes are only enough if you attach the centre of the guy rope to the pole and guy then ends; this means only one of the pair of guys will benefit from the tensioner. We decided it would be easier to have a separate guy rope for each guying point; since there are two guys that are permanently attached to the Skadu we provided two additional ones of our own, which are quite prominent in the photo below. Anyway, let's see what it is like as a stand-alone awning/shelter:

Well, I think I deserve a few minutes in the shade, don't you?

The Skadu original is as above, but  ours is the new version, the Skadu Too, which adds side panels to the stand-alone awning. The panels are shaped to fit and have small toggles which hold them in place at the centre of the long sides and in each corner. Then along the edges of both the awning itself and the side panels there are strips of hook and loop fastener to neatly attach the panels - a few tent pegs at the ground and you are done. Sadly your reviewer forgot that he would need additional tent pegs for the side panels so the photograph below shows them billowing out a bit because they are not pulled tight to the ground.

There are two long side panels and one rear panel with the front being left open for access.

So a thought, if the awning was on the van would the panels be a close enough fit to be useful. Our van is a bit tall so not a perfect fit, but still a very useful wind-break

Of course the back panel would fit, and lower profile vans like Transit or VW based vehicles may find the side panels fit even in this configuration.

So in case you have lost count, let's look at the configurations I've explored with this versatile awning

And combinations 4, 5 and 6 have the option of a rear panel/windbreak being attached, with option 4 allowing for side panels too, along with option 5 on our van and possibly option 6 for lower height vehicles.

Even more, the poles don't have to be fully erected so it would be possible to use just one pole to raise one end of the awning half a metre or two poles one metre rather than the full 1.5m height.

Our plan is to us it:

Flat on the ground - when we go offsite we can drop the awning off the van and simply peg it to the ground. It has plenty enough height to stow our chairs and other non-valuable odds and ends underneath safe from the rain. Also a good place to stow the hook-up cable since it will have been disconnected. Of course, we will only want to leave this useful bit of kit at sites where we feel safe to do so!

At the back of the van to provide a nice bit of shelter for when we come in from the rain and want somewhere dry to take off our coats and kick off our boots. Also plenty enough space to use the Cobb cooker in the dry or sit and read, enjoying a glass of wine. On the back of the van we could also use poles to allow adding the rear and side panels; this could provide a makeshift privacy tent for the loo or shower, as well as a wind-break.

On the side of the van when we want to sit out in the shade of the sun. Indeed we popped out for a couple of days to a campsite to take the photos for this review and we spent much of the time sat under the awning reading. It is a good size for the two of us and would probably be fine for four.

Another use when the awning is one the side will be to allow our washing to dry and air without the risk of rain. We tend to go away        for a couple of months at a time so clothes washing is, unfortunately, a necessity. The awning provides ideal protection from the elements.

Stand-alone as a shelter or gathering place for when we go on 'meets' with friends. Plenty tall enough to stand under and enough space for a couple of tables and a few chairs. We can even add on a side or two to provide a windbreak or a bit of additional shade. Also the awning is versatile enough that it could be appended to someone else's awning as an extension, to make a really large gathering place.

We are impressed with the versatility of the Skadu and the additional sides included with the Skadu Too increase the different number of uses we  might be able to find for it. It is definitely a keeper and will live permanently in the van. It may not be for those motorhomers who want an awning with all the mod cons but for campervanners travelling light who want a versatile shelter from the sun or the rain it could prove very useful, along with those who want additional shade to perhaps augment their more traditional awning.

No tent pegs supplied. I didn't list this as a Con as we carry a supply of good quality rock pegs in the van so the last thing we need is another pack of cheap tent pegs!

This review is based upon a private purchase of the Skadu for our own use. It was prompted because the awning is sufficiently new, unusual, and versatile that I wanted to share the idea with others, particularly lightweight campervanners like ourselves.

The Skadu Too is manufactured by Femkes Rooftop Tents in the Netherlands - https://en.opjeautoslapen.nl/ and distributed in the UK by   Specialist Motorcaravan Services https://www.specialistmotorcaravanservices.co.uk/ and at the time of writing was listed at £139 in either Green (as featured above) or Grey. 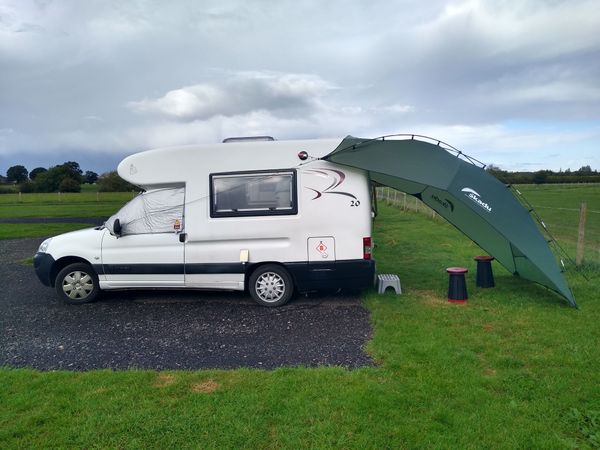 A friend had some questions How are the pole clips attached to the canvas?Ours are attached via a small loop of black webbing which is sewn into the seam 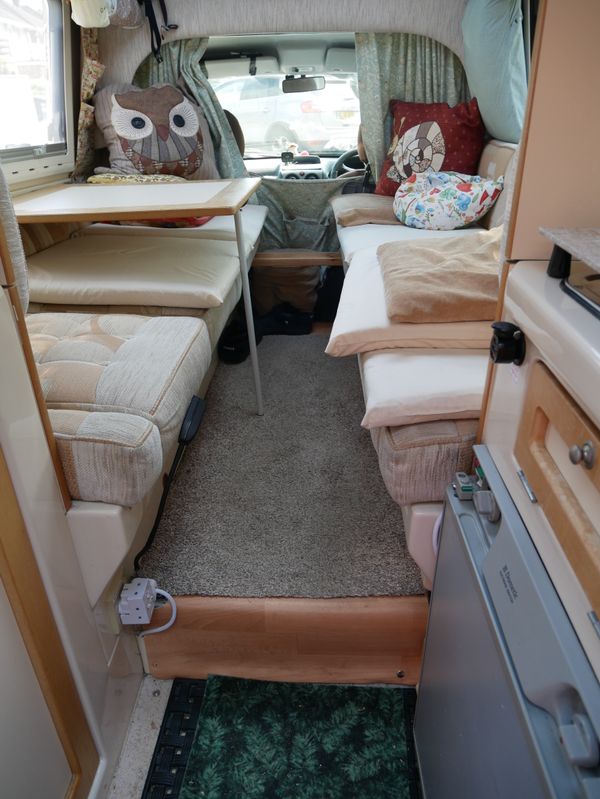 Someone asked what storage was like on an R20 - a video is probably the easiest. Bear in mind, Brian The Snail is an R20 hytop built on the older