A friend had some questions

How are the pole clips attached to the canvas?

Ours are attached via a small loop of black webbing which is sewn into the seam of the main Skadu canvas.

How do you attach the guy ropes?

There are 2 normal guy uses and we have added a third. The front edge of the Skadu has nylon D rings which has a short bit of guy to hold the suction cup and a longer guy to be pegged out along the side of the van or be attached to a wheel trim or wing mirror. In this case both guys are simply tied to the D rings. We found the supplied suction cups that hold the Skadu to the van not terribly good so bought much stronger ones (from Amazon).

When putting the Skadu up on poles we use 2 guy ropes coming out at angles from the pole. To attach to the pole we simply tie a small loop in the end of the guy rope and slip it over the pole's spike. Tension will subsequently keep this in place.

Because we had the Skadu up on one unsheltered site where the wind got up and was bending the poles and threatening to lift the entire awning we also added some guys to the back of the Skadu when it is in the configuration of one end on the back of the van and the other end on the ground (this is our normal use, to make a rear porch for the Romahome). These guys we tied to one of those small loops of webbing that hold the pole clips in - so our clips must be in strongly as those bits of webbing took quite a strain when the wind was blowing a hooley.

This picture just about shows both the two additional rear guys to hold the Skadu against the strong wind and also our new improved suction hooks (Oh, and we like those neat collapsible tables/stools too!)

Will the sides fit when the Skadu is on the van?

My previous blog post has a picture of the Skadu on the rear of the van (like above) but with the back end of the Skadu raised on its poles. That way it is pretty much the same height off the ground as if it were standalone on the 4 poles and so, as the picture shows the velcro-on sides fit pretty well.

When the Skadu is set up with one end on the van and the other on the ground (as in the picture above)  then attaching the sides means a lot of fabric will be on the ground. It may be possible to gather this up in some way and be able to peg it down but it won't be a particularly tidy solution.

Liz is a talented seamstress and she has made our own triangular shaped side panels which fit on the Skadu when it is as shown above. She bought some green ripstop nylon and spent quite a while fiddling with angles and dimensions to get it right.  It has the advantage that the new side extends along the van a little - on the side with the fridge vent the new side passes the vent thus stopping the wind blowing directly into the fridge vent, a major source of draughts in a Romahome. Of course we peg this well away from the van side as as not to impede the ventilation of the fridge.

Sadly we don't have a picture of this at the moment but will update this when we do. 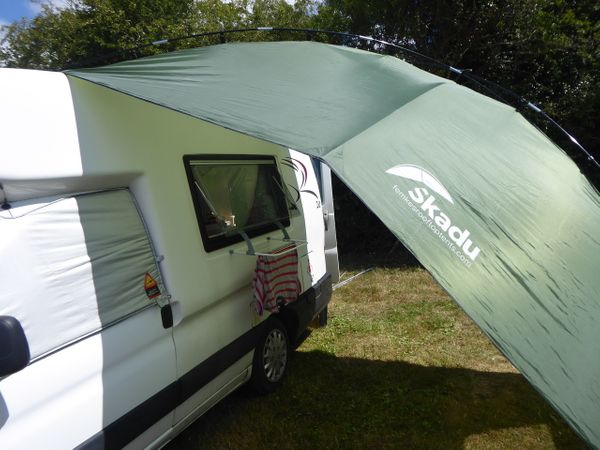 Skadu Too - a versatile awning/shade/cover for everyone Perhaps VDub owners might not agree but we Romahomers consider our vans to be the pinnacle of minimalistic campervan design.